Ode to the Human Body

With the door wide-open, Mom had lifted her shirt over her head, removed the soiled piece of clothing from her arms and was promptly folding it. I hurried to shut the door, consciousness of my mother’s nakedness.

A caregiver had gone to great lengths to cleanse Mom from the waist down. But as Mom and I strolled outside, I noted Mom’s pima cotton top needed changing too, so I had piloted her back inside where Mom promptly dropped down on the bed with a sigh of relief. She had been on a forced march out in the sunshine, only to be goaded back to her room by me.

I didn’t often see much of it anymore, as caregivers were tasked with many of those duties. Occasionally, when we went out, or I brought Mom to my house, I risked having to change Mom while she yelled at me.

Sometimes, I removed Mom’s socks so her feet could breathe in the fresh air. Or, I’d roll up her pants so that her calves, still bulbous after years of stooping to dust and pray, were exposed to the noonday sun.

While I disdained the same scrutiny of my own body, I found Mom’s fascinating. Her body revealed her history of lives birthed and lost, of legs that traveled once to Italy, but mostly up and down stairs. Her feet had worn only the most stylish of pumps, thanks to Januzzi’s Shoes, but were relegated to hefty athletic wear.

As I opened the neck of the shirt to lower over her head, I studied the flat terrain of the right side of her chest, sporting a lightening bolt scar where once was a breast. After cancer came knocking, Mom had politely, though resolutely, declined.

Below me, Mom’s legs, with those short, taut thighs, had been sculpted by years of kneelers and steps that also kept her heart in shape.

Her belly was bloated, not from lunch of turkey wraps, but by children she birthed and the tears she might still cry for the one she gave back. Down the middle of her womb, she carried another line – a stretch mark of stitches from when she was torn open to remove body parts no longer needed. I spent an eternal night with Mom in the hospital, knowing she would yank at tubes, the doctors waiting until swelling in her belly decreased enough to scan and operate. How afraid was she? How afraid was I?

She thread her arms through the shirt and looked up at me with eyes she once claimed on her driver’s license as brown, brown as the dirt of her ancestor’s home. Her eyes turned hazel over the ages, like a clear creek turning with algae. Now, the two o’clock rays sliced through her window, illuminating eyes of green, like the lushness of a meadow where she as a child might have run and played.

My mother was the poster-girl for modesty. I owned more photos of her hiding from a camera than smiling in the lens of one.

I had no sooner straightened the shirt to her waist and Mom stood up and toddled out of the room. I watched her go, as she used her muscle memory and headed back outside pushing on the arm of the door, that time not locked. 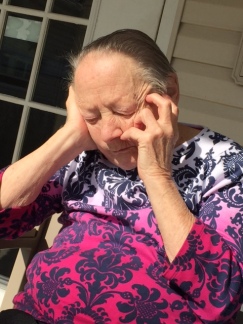 She found the first open chair outside, plopped down and fell into slumber.

I had been absent for a few days, during which, the nurse had phoned to inform me Mom was diagnosed with two strains of UTI. Following that phone call, I was anxious to discover what condition I would find Mom in – sleepy, grumpy, sneezy, bashful.

After the march in and out, Mom’s struggle to change the shirt, and her return to the sun, I was happy to report her body was in the state it was supposed to be in.