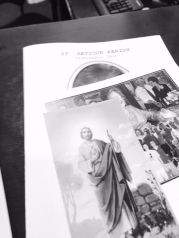 “Miss, excuse me. Miss, do you know what time it is,” Rita often asked in her gravely voice, whenever I visited the care home to see my mother. Rita had been a resident the past four years, same as Mom. She had reset her clock by the times when her children came to call. Rita had a bevy of children who took turns each day of the week.

“One o’clock,” I answered back.

At that point, a caregiver usually stepped in and told Rita one of her children would be coming soon. Four o’clock or three or maybe not until noon the next day. But always, each day.

The second question Rita often posed was, “Miss, excuse me. Miss, can I make a phone call?”

I visited at Arden Courts often enough. Perhaps Rita confused me for someone who worked there, someone who could help. I could, and often did.

Rita died last month, and with her death, came a thousand little ones.

When I moved my mother into her care home four years ago, I was still feeling the weight of my father’s death. I bitched and moaned and complained to staff and directors until I felt Mom was finally at peace.

Early on, I hardly paid attention to the comings and goings of other residents or the wellbeing of the staff. But over the years, I watched residents as they transitioned from their place at the table, asking for the phone or the time, to their place in my memory. And when residents died, those who remained – family of loved ones, caregivers and the residents themselves – were left to grieve.

I hugged many of the residents when I was around. I’m confident many guests hugged my mom when I was absent. Right now, my mom is keen on “Mike” and his soothing voice. Mike is there to visit his wife. Mom doesn’t care. Mike doesn’t either.
In Rita’s waning days, I watched as her family processed in and out of her room and mourned the slow passing of time. Those of us with loved ones there knew to let them alone. The caregivers understood this too. To stay close to the grief, but not in it.

When Rita finally passed away, I observed the caregivers in their loss. They were not “family” in name. Many would not take time off to grieve at the funeral. Long lost relatives and friends who appeared at the funeral would never know the soft face and kind hands of those that touched their loved one.

Where are the caregivers to go to grieve?

They are not called to carry the casket. No one sends them sympathy cards or flowers or picture collages. No one asks what should the deceased wear and how he or she had her hair styled, though the caregivers know those facts better than any family member.

The caregivers were left not behind with fond memories of Rita when she was 20, 40 or 60, but recollections of a woman who grappled with life in a most vulnerable state. Thus, they did the greatest amount of work in the shortest period of time.

Rita is gone and caregivers walk with a little less lightness to their step. I, too, slow when I pass Rita’s room. The length of time Rita spent in the care home, the family’s unwavering commitment, and in turn, the caregiver’s dedication, meant Rita’s death left a hole in the universe. Each time I walk past her room, though the photographs and nameplates have been removed, I feel that void.

So I seek out Mom and hug her a little tighter, to which she yells back. I embrace the women and some of the men, a little more. When the residents giggle at me, nestle into my shoulder, high five me for a Xavier win, or grasp my hand as if holding on the handlebar of a bike, I want them to stay with me, here, longer.

These years have taught me that being in proximity to the purest form of human being brings me closer too. Closer to Rita, her family, caregivers, to all who call each other family and mourn in the confines of that simple space.