Erma Made Me Miss My Mother 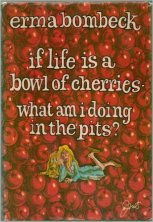 At a recent writer’s conference, I sat enraptured by a performance of At Wit’s End, a one-woman show that brought Erma Bombeck, the famous columnist and humorist, to life on stage.

Tears arrived, not so unwelcome. The story of Erma and the arc of her life made me miss my mother.

Erma was dead and my mother was not. But the mother still alive was not the one I missed. The mother I missed was the one who raised us.

The family home was sold years ago, but the exact location of Erma’s If Life is A Bowl of Cherries, had been burnished in my mind.

Erma’s book, published in 1978, held such an esteemed position in our home that it was placed next to Pope John Paul II’ s Crossing the Threshold of Hope, published in 1995, and the brown and white collection of books with World Book Encyclopedia Edition, 1972, embossed in gold.

At least, that what I recalled before the home’s contents was dismantled.

As At Wit’s End unfolded in memory for Erma’s children seated in the audience, I built my own Greek memory palace, recalling the golden shag carpeting of the family room where a bookcase held those hardcovers and a piano was situated next to said bookcase. And then, tears rolled like my fingers used to move across piano keys.

As I mentally constructed that mnemonic device, I saw myself arguing with my mother over moving the piano from the living room, where there was privacy, to the family room. By then, I had given up piano lessons, but I still tinkered, mostly when no one was around, because I hadn’t practiced enough to play long stretches or memorize extended passages.

I had lobbied for the piano to stay in the living room. There would be no volume debate over TV vs. piano. In the living room, I could play tunes from my older sister’s piano book, songs such as A Time for Us, Memories, or Moon River, and my mother could sneak in, sit on the bench or stand like she was working a crowd, and sing along.

Nowadays, when I sit in Activities with Mom, many of those same melodies waft around the room. For me, the songs of Bruce and Adele are not ear worms. Instead, I hear Someday there’ll be…. A time for us…Jean, Jean, roses are read all the leaves have gone green.

After the piano move, the instrument sat unplayed through protest and neglect. Erma’s book became the lone remaining memory I had of Mom in that corner of the family room.

My mother and Erma were born a year apart, Erma in ’27, Mom in ’28. But Erma birthed her children about ten years before Mom. Mom married later in life, which was how my father’s mantra or moan of “ten years too late” came along.

Reading Erma’s column must have been informative for my mother, but also a bit alarming. Erma was rearing teens when Mom was raising babies. Erma’s words were foreboding.

In her humorist tones, Erma set the stage for so many homemakers. But my mother, perfectionist, child of the Depression and fabulous cook, took a more solemn approach to those homemaker duties.

My proper mother threatened to wash our mouths out with soap or swear to the truth on the Bible, or saved piles of Styrofoam meat containers to send us home with her breathtaking cakes and cookies.

She was a woman who ran her finger across the tops of our dressers to ensure we dusted on Saturday mornings.

However, she also smiled, sometimes laughed out loud, whenever I spied her reading Erma’s book or columns.

Erma’s perspective was from the nonconformist’s view. The “I’m busy writing, so I’ll slip some money under my door for the children to go to McDonald’s”. And Mom secretly found comfort in Erma’s words. Someone out there knew how to let go of the limitations of the times.

What remains is a mother who let go of those constraints, of the need to be perfect, who cares little for her appearance (mostly because she doesn’t know to), and who lets other people cook and care for her.

I see Mom now, surrendering to her dementia, and to modern times when she doesn’t have to recall her children’s names or faces or where they lived. A wife who doesn’t have to remember to iron a husband’s shirt or buy his favorite ice cream.

A woman whose only saving grace is her laughter and smiles and, occasionally, running a finger across chair rails and medicine cabinets to make sure somebody is doing his or her job, a job that no longer belongs to Erma or Mom.