In Her (Virtual) Shoes 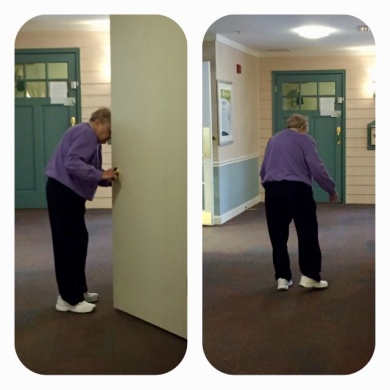 In which I learned how to let go of shoes.

What would I carry to a desert island, I wondered, as the song, Desert Island Questionnaire, crackled through speakers in the drafty café where I was writing. My answer would be shoes. A byproduct of the trade, leftover from my father’s days in the shoe business.

My writing partner, Russell, offered a vastly different response. “I’ve been thinking about virtual reality in geriatric care. How deeply can someone be immersed in it?” Was he asking me? I wasn’t sure.

I was both perplexed and awed, as I too had been thinking about virtual reality: in particular, my mother’s. After observing her earlier in the week folding towels and shirts in a task she no longer had to do but mindlessly picked up a washcloth from someone else’s laundry cart and began to fold. What did she carry, stranded as she was on another shore?

I had begun researching virtual reality in the dementia field and ordered Google Cardboard goggles to play around with the sensation on the Internet. There were various sites where I could play a video, and while wearing the goggles, become immersed in a three-dimentionsal setting that was not my office. Swimming with dolphins was a popular video to watch with the glasses. While digging around through other websites, I discovered a project called The Wayback.

In the dementia field, triggering memories of joy in one’s life translated to a sense of peace in the present moment. Many care homes and family members already used various methods, props and pictures to do so. Virtual reality (VR) simply extended that practice.

The Wayback was a series of virtual reality films that recreated a familiar time in a viewer’s life and immersed one fully in it through the use of virtual reality. The first film was developed around the Queen’s coronation in 1953.

Back in the café, my world of shoes and Russell’s world of VR had collided across the community table. I later asked Russell about his odd interest.

“The idea of reliving something to jog memories, etc. I have a morbid fascination with it too, this idea of losing oneself in VR…what weird psychological issues could arise if someone who is wheelchair-bound or something spent twelve hours completely mobile in VR, then had to come back to their not-so-spry body in reality?”

When my husband and I toured Havana, Cuba, our itinerary included a social program visit to the Art and Film Institute where we learned how a stop-motion film was made. It was a dreary, but pointed, film about domestic abuse. The film won several awards. A stop-motion film was created via the building of a set comprised of objects and characters, animating the objects and characters one frame at time, and moving and filming them again. It was a long, pain-staking process.

But so was my mother’s life.

I started rummaging through my closets to relocate many of my mother’s belongings. In the hallway closet, I found my mother’s Dumas cashmere coat and another black purse with a gold clasp. In her jewelry, I remembered seeing her old broaches and Christmas tree earrings. In my kitchen I kept her crème-colored ceramic bowl in which she mixed her cookie dough, her flour sifter that still had a speck of flour from 2010 on it and her cookbook collection that ranged from the Joy of Cooking to The New Zucchini Cookbook (she had two copies). In my pantry, I located several of her metal cake molds. Who didn’t remember my mother’s bunny and lamb coconut-crusted cakes? She baked shaped cakes for us, mine without the coconut fur on the bunnies and lamb. She baked a birthday cake every year for my son, in shapes ranging from the Scooby Doo Mystery Machine to the Veggie Tales’ Bob the Tomato and Larry the Cucumber.

I set these items on the dining room table and looked them over for some time. The longer I observed them, noted their wear and tear, the weight of them, I felt them come to life.

Could I do the same thing the movie had done? Reconstruct a life from scraps of my mother’s belongings?

With my mother’s nut grinder, could I recreate an hour out of a day in 1975 when she relished in the quiet while the kids were at school and she slid pans of nuthorns in and out of the oven like an expert pizza maker?

With her Christmas tree pin, the kind I gave to my preschool teachers, could I recreate a virtual Christmas, one in which my father engineered his trains to run beneath the ping pong table or strung the Christmas lights in a straight line, or all my mother’s kids were at home after schlepping their bags from the far corners of Ohio or Oregon. Or a Christmas eve with all the grandchildren present and superimposed.

With the nightstand that acted as sock drawer in my mother’s room at her care home, could I reconstruct the two-story colonial home on Lincoln Street, the home that filled my mother with pride? Would she wilt under the weight of the expectation of having to clean it? Through graphics, could I rebuild the ranch on Ridgeland Drive complete with flooded basement, where she proclaimed, as a family, we were happier because we were closer together if happiness meant three girls housed in one bedroom? Or would she shudder at the recollection of the waterlogged lower level? Would she wait at the back door with Swiss Miss hot chocolate after we sledded down the hills of the sanitarium or recall how, to her dismay, we traipsed ice and snow through the house?

Russell’s last question came back to me. What issues could arise if someone come back to his or her not-so-spry body in reality?

Through the charmed viewfinder, my mother would be encapsulated in the life she lived. Would she find comfort there? Could she return from that moment to the one right in front of her, where she did not recognize those around her and still find joy? How long would that joy last? And what would three minutes of stop-motion animation be worth?

I played that line of thinking out to its bitter end. Would the project travel back further in time before my mother chose a husband or chose marriage over work? She was bright and funny. Would she have decided to live a different life? Would this leave her with a pang of regret to transport into the present? Was that considered mind manipulation and who then became the POA for a mother’s memory?

I imagined a place or device where I could view that film of my mother’s time, a film as personalized as a pair of worn shoes, form fitting, evidence of her life and style choices, with maybe a chipped heel in a nod to journeys taken. A film that responded to a memory my mother would have carried to a desert isle, something more precious than a pair of shoes.

Say that you were stranded on a desert island…

Shoes was my original answer. Then I changed my mind to my mother’s shoes. But I had already walked through the recreation of her kitchen, her Christmasses—and make no mistake, they were hers, and her closets.

I would just pick my mother, or a memory of her, warm water lapping up over her toes on the shore. Yes, I would pick my mother without her shoes.