Three Questions and a Fourth (in Oregon)

“Where will your baby play?” Mom asked me.

Standing side by side, we faced wave after wave of oncoming ocean. Sand washed up over our bare feet immersed in the frigid waters of the Pacific.

I was pregnant. Five months in the belly, four to go. Or so I thought.

My mother was visiting. 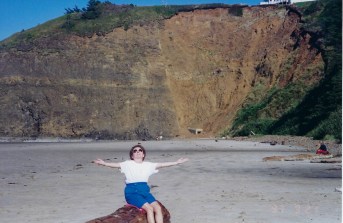 The Pacific was not new to her, after trips to California, Hawaii and several now to Oregon. It was only new to our relationship. She grappled with my move from Ohio to Oregon, four months after the moving van closed the door on my twenties.

I rubbed my belly, protruding but noticeable only to Mom and me, and took in the salty air, peppered by smoke from last night’s fire. It was a smell I would carry with me forever. The baby would too.

“What do you mean, Mom?” I stared down the tide with hands on my back to hold up whatever life force was in me.

“He or she will have the entire Oregon Coast as playground.” I swept my arms up and down the coastline. There would be no need for slides or swings when tide pools and sea stars tickled the baby’s toes.

I tossed off the question and brushed sand off my feet.

But a few specks of my mother’s intrigue followed me home, lodged themselves deep into my subconscious.

A baby boy was born, four weeks early. I had cheated Mother Nature on the last month. So did he. We named the boy, Davis.

He not only found a playground, but he made it home.

“Where will Devin be buried?” my mother asked.

It was the year 2000. My first husband, Devin, had died of leukemia. On the phone to my mother, I dared reveal his wishes to her. “He wanted his ashes scattered along the Oregon Coast.”

“But where you go, to visit him. Where will his grave be? How will you honor him?”

My mother was a devout Catholic, unaccustomed to new customs, ones that didn’t involve cemeteries.

After all, her Sundays, our Sundays as children, were built around church activities and visiting cemeteries. It had always been that way for her. Graveyards were just an extension of the family home. In her generation, her faith stipulated a body should be buried – most likely to appease the coffers and not the spirits.

I huffed. I always had an answer for her, she’d say, to dismiss my responses. She would do the same thing now I was sure. But I answered anyway.

“Mom, I’ll get on a plane and head to Oregon. Like I did before our move, like I’ve done since.”

“It’s not about what you or I want.” No one had to ask, what would Devin think? It was what he wanted.

“Oregon, who is in Oregon?” Mom asked.

It was 2015. My eighty-seven-year-old mother now experienced significant cognitive decline. We sat peering out the windows at a large pin oak with fluttering leaves hanging on through winter. I scrolled through photos on my iPhone, showing her pictures of her grandson, Davis, whom Mom saw frequently, but not since he left for school in Oregon.

It was Christmastime. Davis’ flight was set to arrive amidst sleet and snow that evening. I was anxious to see him.

“I’m sure he will come visit you.” I patted her on the knee.

The two of them had always been close. She took hold of my phone and stared long at the grandson who possessed the dark hair of my father, the deep eyes of the Italians and the smile of Devin’s, whom my mother loved like a son. A grandson she knew to love, even if she didn’t “know” his name.

“But what is Oregon?” quizzed my mother. She was the same woman who once chastised me for wanting more in my twenties, for moving to Oregon when I was pregnant, for wanting everything Oregon in the way she desired everything Italian.

A state of mind, a state of restfulness, healing and peace. It’s a place I go when life falls apart. It’s a place where I let my thoughts rumble and tumble in the arctic waters. Like agates smoothed over. A place where I offer them to the sea stacks and set them on the altar of the Fates.

It’s 2018. What is Oregon? A place I’ll go after you die, Mom. Its a place of remembering for me. I’ll remember your first three questions: Where will your baby play? How will you honor Devin? Who is in Oregon?

The corners of my mouth will turn up and I’ll open my lips to catch the sea mist or the rain.

In those drops of purity, I’ll remember Davis’ birth, Devin’s rebirth and yours. And I will have all the answers you and I both need.