“Come here,” Janice said, pulling me over to the other side of the family room on Country Lane at my mother’s former care home. “I want you to meet someone.” Janice had once been my mother’s favorite caregiver and now she supervised the other caregivers.

Janice turned my attention to a woman seated in an armchair, with the window at her back. The petite older woman with soft gray hair waving around her roundish face perked up. She was flanked by a man and woman in their mid-to-upper fifties—about my age. The light from the window dispersed around the outline of the older woman, illuminated concern on the faces of those seated beside her.

“This is Miss Lenora…,” Janice said, a little out of breath.

Before Janice could say more, I knew how she would finish her sentence.

“She just moved into your mom’s old room.”

A hammer came down on my heart as I stared longingly at the new Mom.

In my former neighborhood in Loveland, Ohio, when close friends and neighbors of ours, the Murrens, moved away from the neighborhood, we referred to the family that took their place as the new Murrens, and the next family that moved in afterward was called the new, new Murrens. In time, this happened for us, as we left Loveland and whoever moved in became the new Wicks or new Manleys.

The meaning was still the same. The ghosts remained, and no one could take the place of our original neighbors turned friends or what they had meant in our lives.

When I had arrived at the care home earlier, Kimberli, the new marketing director, ushered me down the hallway to find Janice. In the space of the family room, I looked around and saw the familiar faces of Tim, seated with his daughter and her small dog at his side, and Miss Mollie, bent over in her wheelchair, mumbling, wanting to hold my hand—forever, if I let her.

It was Friday and in my hands, I held a box of Busken’s Bakery tea cookies and passed them around.

That’s when Janice came to my side, and now, there was not only a new Mom staring back at me, but two new Annette’s.

It had been a while since I had seen that look on someone’s face—a look of coming out of the physical chaos of loving someone with dementia and landing in another equally chaotic, but emotional, life.

“Annette, this is the son and daughter-in-law of Lenora—Ellie and Rick,” Janice said.

“Nice to meet you,” I said, hoping to break the tension I felt emanating off the loved ones I was introduced to.

“We just moved my mother from U.P.,” Rick said right away.

I nodded, familiar with the designation of UP, meaning Upper Peninsula, Michigan.

“So you live here in the city?” I asked, not knowing if there were other family connections or caregivers that would be on the scene. Would they be on the premises when they had to—and even when they didn’t?

One of my strengths was to easily find personal connections in any room I walk into. But I had difficulty doing so, somewhat distracted by Lenora. Not by what she was doing, but by her being. I looked at her, a smile spreading across her cheeks possibly without her knowing why. “You’re in a good room. I promise you there’s lots of good energy in there.” Her family didn’t look too sure so I decided to leave out the part about the feisty energy too.

The glare from the windows obscured Lenora’s face just enough for me to witness her lips, her smile, transform into my mother’s. I could see, feel, almost taste, my mother’s presence in the room.

Janice and Kimberli were in the background and I wondered if they felt the same as I did in this exchange. The conversation felt like speed-dating, but only with the caregivers watching Elle, Rick and I, wondering if we would all become friends.

I turned back to Rick. “I moved my mother from northern Ohio, so she had to go from being a Browns fan to a Bengals fan,” I said and laughed. But my mother didn’t really change sides, because in her heart, if not in her mind, she was always a Browns fan, and only cheered when I told her to cheer as we watched the games together in her later years.

“My mother’s not really into sports,” Rick said in a flat tone.

I was crushed—not because my joke fell flat—but for them. For what lay ahead of them that they couldn’t see. That I couldn’t see either, but that I could feel. In my bones, in my heart, in my knees now shaking.

“Miss Lenora, would you like a cookie?” I lowered the box down to her lap where she could see inside to an array of colors on the frosted cookies, now in green and yellow sprinkles for St. Patrick’s Day, though it was only one day past Valentine’s Day.

“Annette brings cookies on Fridays,” Janice explained to Kimberli, still standing behind me, and to the other families in the room.

Not every Friday, not anymore.

“Oh that’s nice,” Lenora said. She fingered through the pile to get to a chocolate one, her thumb pressing down on the frosting, leaving a swipe of chocolate on her fingernail after she put the cookie in her mouth. The leftover smudge reminded me of my mother’s messiness and how she would lick her fingers to taste the chocolate–and the love.

When Lenora reached for a second cookie, her son’s hand shot out across her lap. “Mom,” Rick said.

I knew that maneuver. I saw me in him again, that person trying to control what no one could.

“It’s okay. That’s why I bring them. Betty already had her share, right Betty?” I asked of one of my favorite residents.

“Yes, ma’am, you sure take care of me.” Though time had not. Betty had aged in the months since I visited regularly. I never saw Betty age a day in the six years I was a guest at Arden Courts, and now, with a few of her front teeth falling out, I saw her growing old in front of my eyes.

“You can have however many you want.” I shook the box to move the cookies around.

Lenora fumbled a bit as her daughter-in-law found another chocolate one for Lenora eat. Another rookie move. Let her do it herself, I had learned. She had all the time in the world to find the one she wanted. I did too.

“Lenora, I’m glad you’re home,” I said, wanting to help ease way. I immediately wanted to take back my statement. Someone else should tell her she’s home.

Rick’s voice didn’t waver. “She wanted to stay in her own home.” Yes, that I understood.

Lenora reached out for my hand. “Thank you for seeing me,” she said, as if that had been my plan all along to visit her.

I wondered, if, in that moment, Lenora really knew I had seen her, because I had seen my mother.

I handed my business card to Rick. “You can call me, I’ll meet for coffee…whatever.” The whatever included venting, Kleenex, opinions, and advice that might not stick.

I shook hands with Ellie, the daughter-in-law. “It was nice meeting you. I’m sure I’ll see you again.”

I looked down at the flat soles of her shoes and her husband’s thicker rubber soles, to note the tracks they would make around the care home’s courtyard when the sun came out, or along the short corridors that seemed long when walking them with my mother who stopped in each room or was easily distracted by anything that shined.

“We didn’t have to do this with my parents,” Elle said as I eased away, wanting to stay put, to listen for more. “My father died when I was younger and my mother lived to ninety and stayed in her own home.” Maybe that was lucky for her then, given the history with my parents. “We never had to do this for them.”

Janice and I walked away, both in tears. At the end of the hallway, we bumped into Tammy and Michelle, two other long-time staff members there at Arden Courts.

We hug and dispensed with the comments about my hair getting longer, something my mother would have commented on.

“I just met Lenora,” I said, my voice trembling to go with my hands shaking.

“Yep, just like our Jean, the Bean,” Tammy said. 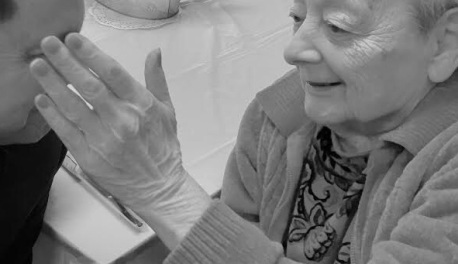 “When I’m changing Lenora,” Janice said, “she touches my cheeks and….” She gestured to reflect her statement.

I missed that gesture. I sensed Janice did too.

I understood that gesture. It was my mother reaching out to Lenora to say Welcome home.